Below are a few media articles that we have been featured in. Have a read, and click the link for the full article!

Jonathan Zerkee, President of Sonbuilt Custom Homes, was featured in this news story by BC Hydro on the increasing interest in owning a high efficiency home. Article on High Efficiency Homes

Our local Abbotsford project was featured in Home Builder national Canadian Home Builder’s Association magazine.  This project encompasses many energy and water saving technologies including solar, waste water heat recovery, rainwater harvesting and geo exchange heating and cooling.    As a builder of high performance homes in the Fraser Valley we are passionate about building better, healthier homes.  Our Abbotsford project showcases many technologies we believe will become standard in the near future.

A couple members of the Sonbuilt Team were pretty excited to be featured on the front cover of Home Builder magazine.  Way to go guys! 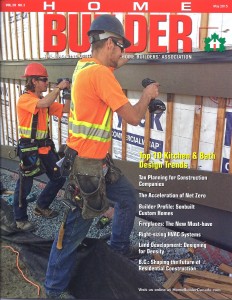 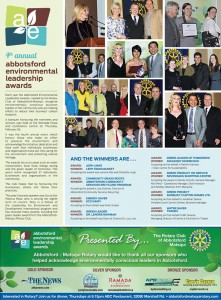 On December 9, 2014 the CHBA Board Executive Committee approved the 2015 members of the Association’s Net Zero Energy Housing Council (NZC).    We are honoured and excited to be selected and look forward to helping meet the housing aspirations of Canadians!

The Canadian Home Builder’s Association of British Columbia interviewed us regarding Education and Certification with the home building industry and why training is so important.

Click here to read the article – Use a Professional – department G

Upon becoming President of the Canadian Home Builder’s Association of the Fraser Valley, Jonathan Zerkee was featured in Business Fraser Valley newspaper. 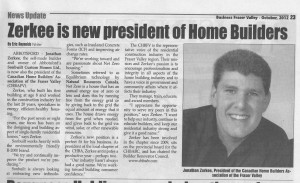 Local newspaper Langley Times caught up with Jonathan Zerkee to discuss his role as President of CHBA FV.

The Abbotsford News took some time to interview Jonathan Zerkee regarding his position as President of the CHBA FV.

Way back in 2005 North American magazine Design Build featured Sonbuilt Custom Homes as one of the top 10 design build firms in North America.